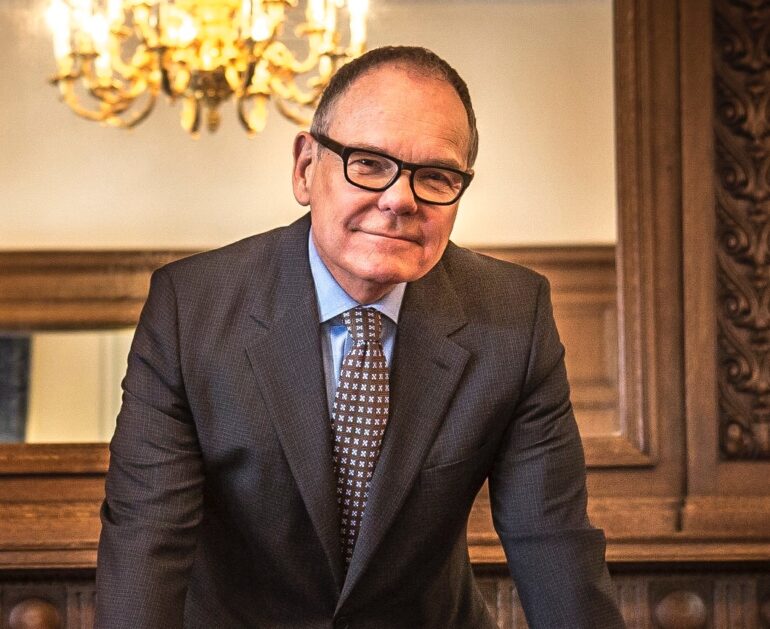 Don Tapscott is among the world’s most notable thought-leaders on Blockchain technology, modern media, disruptive innovation, and the economic/societal implications of the aforementioned. He is the Chief Executive Officer of The Tapscott Group and was founder and chairman of the international think tank New Paradigm prior to its accession in 2007.

In addition, Don Tapscott is the Founder and Executive Director of Global Solution Networks, a multi-million dollar program investigating networked models for cooperation, problem solving and governance. In 2013, Thinkers50 listed him as the 4th most important business thinker in the world.

Don Tapscott has authored/co-authored 15 books, including most recently: Blockchain Revolution.

In this Q&A interview Don Tapscott shares his top tips on the development of Blockchain technology, networking successfully, establishing economic growth, learning from experiences, and much more.

Wait no longer, read this exclusive interview with Don Tapscott below now…

Q: What does being an author mean to you?

I’m not primarily an author. I do research and have various ways of communicating my findings and conclusions. Writing is probably the most important way. Notwithstanding all the emphasis on multi-media I still think there is no medium more important to civilization than the written world.

Q: What inspired you to write Blockchain Revolution?

A conversation with my son Alex on a father son ski trip three years ago. Alex was an executive at an investment bank and had taken responsibility for their growing deal flow for bitcoin startups. I was writing introduction to the 20th Anniversary edition of the Digital Economy and was looking into crypto currencies as the next big thing in technology. One thing led to the next and we decided to do a bunch of research projects on how blockchain might change business and the world.

Q: Why do people need to pay attention to Blockchain technology?

Because it’s nothing less than the second era of the Internet. For decades we’ve had the Internet of information. Now we’re getting the internet of value. This will enable profound changes in the nature of firms: how they are funded and managed, how they create value, and how they perform basic functions like marketing, accounting, manufacturing and innovation. In some cases, software will replace management altogether. We can fix the deep structures and architecture of government and how we create public value and maybe even build a second era of democracy based on accountability to citizens, transparency and a culture of public deliberation. More broadly it gives those of us who want a better world another kick at the can to rewrite the economic power grid and the old order of things.

Q: How will Blockchain technology change the financial services industry?

I agree with Ben Lawsky (former Superintendent of Financial Services for New York State) that in 5-10 years the industry will probably be unrecognizable. Whether it’s the incumbents or new players that do the disrupting remains to be seen. Although as I said in Paradigm Shift in 1993, “Leaders of old paradigms typically have great difficulty embracing the new.” The best short (18 minute) overview of bow blockchains will change this industry is Alex Tapscott’s TEDXSanFrancisco talk “Blockchain is Eating Wall Street.”

Q: What business do you admire the most (apart from yours)?

This week I’m admiring Kelloggs for pulling its advertising from Breitbart News. It’s great to see a company act with integrity.

Q: What do you find challenging about being a business executive in your industry?

Well, my main business is a think tank. Over the years it’s always been relatively straightforward to come up with important new ideas, identify new paradigms and strategies to move forward. The challenge has always been to bring about change in our clients.

Q: What advice would you give to startups?

I wrote an article about this for LinkedIn in the past. The main suggestions were:

Q: If you could spend a day hanging-out with three people from history, who would they be? Why? What would you like to ask them?

I’d love to chat with William Shakespeare, Leon Trotsky and Albert Einstein. But given that our conversations would probably alter the space-time continuum and future history, and thereby likely obviating the possibility of my existence, I’ll take a pass.

Q: What experiences in your formative years helped you to become who you are?

My parents were always big on doing the right thing and following your dreams. They were angry about injustice and I remember us talking about big problems in the world a lot. Making money to them was never a goal, and at best a bi-product of doing something consequential.

Q: What would you do differently in your life, if anything?

Ha. Hindsight is 20/20 for sure. If wealth is what drives you could pretty much purchase and own the global economy. Like I would have invested in eBay when we discovered them in 1994 (called Auction Web at the time). An $100k investment at the time of our report would be worth $5-6 billion today. In the process I’d purchase a controlling interest in Amazon, and Google. Oh, and I’d short technology in February of 2000. You could pretty much purchase all companies, assets and wealth in the world. Which is why such questions aren’t all that helpful. As for bad mistakes, And bad mistakes ‒ I’ve made a few. I’ve had my share of sand kicked in my face. But I’ve come through. (Wasn’t that in a song?)

Q: How have you gone about building such an incredible network of contacts from notable thought-leaders such as Steve Wozniak, Dan Schulman, Marc Andreessen, Walter Isaacson, and Klaus Schwab to mainstream media outlets such as The Wall Street Journal, Financial Times, Forbes, Fortune, and Oxford Economics?

I’ve been around a long time and I suppose that if you do good work people will notice and want to collaborate with you.